Last weekend was the BC Reptile Club Fall 2017 Expo in Abbotsford. It’s always fun for catching up, making new friends, and seeing a bunch of awesome reptiles! Thanks to all our BELs being sold or spoken for before the show, we didn’t have a huge table, but that didn’t keep us from having a great time! One of the best parts was catching up with the man who bought the first snake we ever sold, a Firefly who has since been named Loki! Loki is doing great, and his owner was there looking for more ball pythons as he was going to be getting into breeding himself! It makes us so happy to hear when one of our babies is thriving in their new home!

The baby who kept us laughing all weekend was one of our Black Pastel Het Albinos. From a certain angle, his markings make him look like he is making the grumpiest stink face, and we just happened to be sitting at that angle from him. Nothing like looking into the display containers to check on the babies and seeing a tiny little grouch face staring back at you! Everyone was great with being handled though, even by small children, and the babies definitely won over a few people who were on the fence about snakes.

We bid adieu to one of our male Het Albinos! He was bought by an awesome couple who already have two snakes, but were looking to get their first ball python. He was a great fit for them because they were looking for a male, and they seemed interested in the recessive Albino gene even though they hadn’t thought of breeding ball pythons. His chill personality also played a huge part in winning them over!

One of the best parts about being at the show all weekend is getting to really check everything out. The Westcoast Society for the Protection and Conservation of Reptiles table had a few of our favourites! Curtis could not stop talking about their carpet python, and was also really amused by the adorably chubby blood pythons a few tables down.  And of course, everyone loves the bearded dragon at the WSPCR table who chills out in a rhinestoned basket, wearing a blinged out collar! This year was the first time Rheanna attended the show, and she was thrilled to be spending the weekend just 20 feet away from Elemental Herps, who breed western hognoses. All in all, it was a great whirlwind weekend and we’re already excited for our next show!! 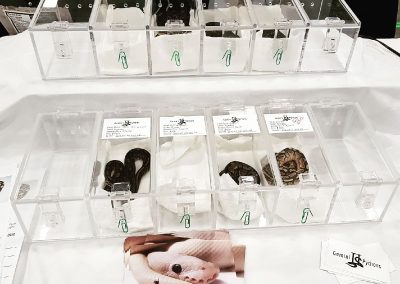 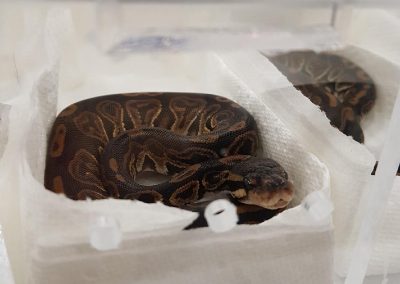 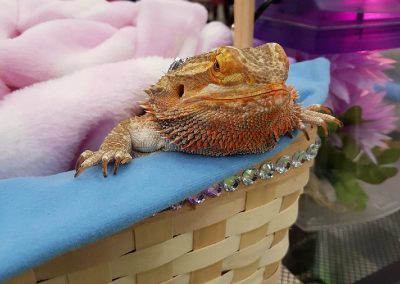