A nice, big clutch of 9 eggs has been laid by Chantel, our Champagne. The clutch is dual sired with a Black Pastel and Coral Glow, so it’ll be interesting to see what comes out of the eggs in 2 months! Lots of people have been asking about Pied ball pythons, so keep this clutch on your radar. Black Pastel Champagne shares some visual similarities with Piebald (usually having a white ringer around the tail) though genetically, is an entirely different morph! 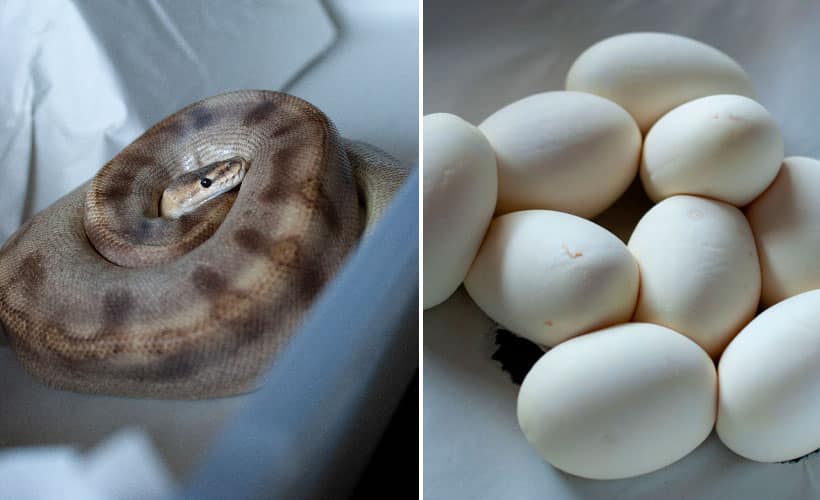 Our Blue Eyed Leucistic x Mojave clutch is now all out of the egg! All have been spoken for: The three BELs have holds (and a waitlist if a hold falls through) and the one Mojave will be a holdback! We’ve posted photos of the BELs on our instagram and will put them up as holds on this website when they’ve been sexed and photographed.

And alas, we were hoping that this year would be the first time we could attend the Western Canadian Reptile Expo in Red Deer, Alberta, but we are in the same position we were in last year at this time: sold out of ball pythons!! It’s a nice problem to have, but we hope that won’t be an issue for much longer. We got a great new incubator from Cornel’s World in Calgary, Alberta, so we can now plan for at least ten clutches a year. As always, we are so grateful for all the support and interest we’ve received from ball python enthusiasts across Canada!